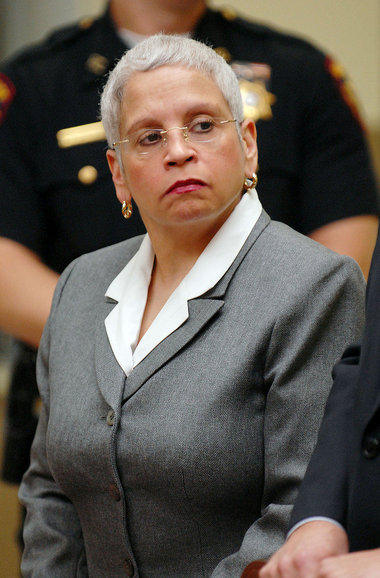 Justice Helen Hoens, on her last day of oral arguments on the New Jersey Supreme Court, gave a valedictory that deliberately avoided the circumstances of her premature departure.

“I choose … not to comment on the roiling waters of politics that swamped the little boat of my judicial career,” she said Tuesday to an audience that included family members and former court justices.

“I wasn’t planning on leaving quite so soon,” she said. “I am content to let history judge me by the body of work I have left behind.”

Prior to her speech, Hoens’ colleagues had praised her “courage,” “fearlessness,” “brilliance,” “strength” and “compassion.”

Hoens, the parent of an autistic child, said, “I became all of these things because of my son, because of the life that I lived with my son, there in the margins and the shadows of society. All of it was forged on the anvil of autism.”

Hoens implored those listening to remember her words the next time they come across someone who may be autistic, saying, “Tell yourself this: Somebody just like that taught me everything I need to know to be a justice of the Supreme Court of the state of New Jersey. Think on that. Remember that.”

Chief Justice Stuart Rabner said, “To say that we will miss you … is an understatement.”

Justice Barry Albin added, “To keep pace with you, every member of the court had to be at the top of his or her game.”

Gov. Chris Christie announced in August that he would not renominate Hoens, a fellow Republican, when her seven-year term ended, saying he wished to spare her from an act of “political vengeance” that would blemish her “outstanding judicial career.”

Some Democrats had indicated she could face a difficult confirmation process because of Christie’s decision in 2010 to not nominate Justice John Wallace Jr., a Democrat, for tenure.

Christie has nominated Camden County Assignment Judge Faustino Fernandez-Vine, another Republican, to fill Hoens’ seat when her term ends on Oct. 26. The Senate Judiciary Committee is scheduled to hold his confirmation hearing on Oct. 17.

TRENTON—Critics of the breath test used in New Jersey drunken-driving cases took aim Tuesday in front of the state’s Supreme Court, arguing that modifications mandated by the court five years ago haven’t been implemented by the state and that the test should be scrapped.

At issue is Alcotest, the machine that began to replace the old Breathalyzer machines beginning in 2001. A lawsuit brought by 20 people charged with DWI who challenged the results of the test succeeded in halting the use of the machine in 2006. A 2008 Supreme Court decision that called Alcotest “generally scientifically reliable” and allowed the machine to be used, with some modifications, but required the state to make software changes in the machines and create a centralized statewide database of Alcotest results that would be available to defendants and their attorneys.

Attorney Evan Levow, who represents drunken driving defendants, said, “Alcotest is scientifically unreliable because the state never made the changes.”

Arguing for the state, Deputy Attorney General Robyn Mitchell said the software modifications required in the 2008 ruling are included in the new version of the Alcotest that hasn’t yet been rolled out.

The court could rule that the current version of Alcotest is acceptable or that the new version should be implemented, or it could appoint a special master as it did before its 2008 ruling to review the machine’s reliability.

Can We Help You?