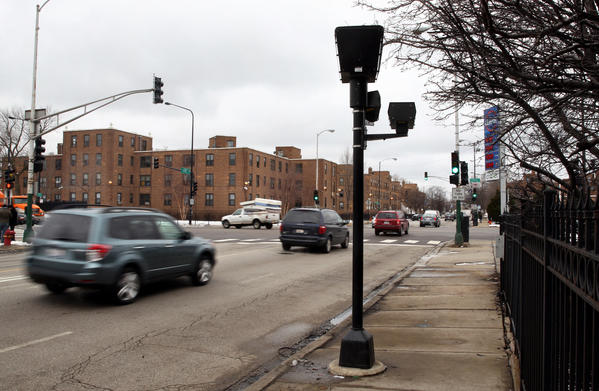 A Northwest Side man filed a proposed class-action lawsuit today seeking at least $100 million from the scandal-plagued company that ran the city’s red light camera program, claiming that an alleged bribery scheme exposed by the Tribune should nullify the company’s profits.

Matthew Faulkner filed his federal complaint on behalf of anyone who paid a fine for a red light violation issued by the city from 2003 to 2013 when Redflex Traffic Systems administered the program. Attached to the lawsuit were documents showing Faulkner paid a $100 fine in early 2013 after his Nissan Infiniti was recorded going through a red light at the intersection of 76th Street and Stony Island Avenue.

The complaint outlines the Redflex scandal that erupted in October 2012 after the Tribune obtained a two-year-old internal Redflex whistleblower memo by an ousted vice president that detailed the alleged bribery scheme, including lavish company-paid vacations for former city transportation official John Bills.
Bills, a longtime City Hall insider who headed the city’s red light camera program until 2011, was arrested in May and charged by federal prosecutors with plotting to steer the contract to Redflex before the first ticket was ever issued in 2003. Bills coached Redflex officials in a series of clandestine meetings and helped them grow their program into the largest in the country, authorities alleged.

In return, prosecutors alleged, Bills received hundreds of thousands of dollars in cash spent on a vacation home, a boat and a Mercedes convertible, along with dozens of trips and a condominium near the company’s Arizona headquarters. “As such, Redflex’s $100 million (+) in revenue since 2003 generated under the corrupt contract represents ill-gotten gains that have unjustly enriched Redflex…and should be disgorged,” Faulkner’s lawsuit said.

Bills has denied any wrongdoing and is awaiting trial. Neither Redflex nor any company officials have been criminally charged, though the city canned Redflex last year in the wake of the scandal.

Faulkner’s local lawyer did not immediately return a message seeking comment on the lawsuit.